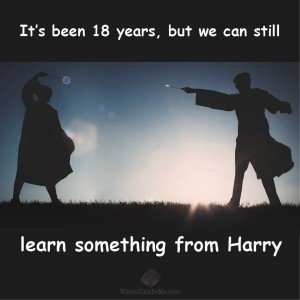 If you’ve ever caught yourself wishing you could live in Harry Potter’s world of wizards and magic, then you’re probably not alone. Harry’s life is filled with all the excitement of spells and potions, castles, dragons and flying broomsticks. But magic isn’t the only thing Harry has going for him, and if you’ve ever read the novels, then you probably know that the character develops some truly enviable friendships throughout the series. As the stories progress, Harry and his friends prove to be extremely loyal and supportive to one another, no matter what life throws at them. While Harry’s story is fictional, the novels can still teach some important lessons about friendship in real life.

As of today, it’s been 18 years since the first Harry Potter novel was published. In honor of the anniversary, we’ve made a list of the 3 biggest friendship lessons we learned from J.K. Rowling’s “Harry Potter and the Sorcerer’s Stone.”

1. The Popular Crowd isn’t Always your Best Option: Shortly after boarding the Hogwarts Express, Harry is invited to join Draco Malfoy’s friend group. Malfoy’s cool kid status is ensured by his wealth, reputation and confidence. Still, Harry rejects the invitation, opting to stick with his far less popular friend, Ron Weasley. As fans of the book know, this proves to be the perfect decision for Harry. While Ron may not have a cool reputation, he and Harry have a lot in common, and genuinely enjoy one another’s company. By refusing to get caught up worrying about reputations, and choosing the friend that was right for him, Harry found a companion that was loyal, trustworthy, and supportive through all of life’s up’s and down’s.
2. True Friends Like you For Who You Are: When someone is truly your friend, you don’t have to change to earn their approval. They will embrace your strengths, talents and interests, even if they don’t have the same ones. This is something that Harry, Ron, and Hermione understand well, because they recognize that they each bring something unique and special to their friend group. This is especially clear when they go in search of the sorcerer’s stone, and wind up facing a series of tests in order to reach the stone. They ultimately make it to the end thanks to Ron’s loyalty, Hermione’s intelligence, and Harry’s courage. Instead of being a source of drama among the three of them, the group’s differences make them the perfect team.
3. It’s Okay to Disagree: As Dumbledore tells the students at the end of the year, “It takes a great deal of bravery to stand up to our enemies, but just as much to stand up to our friends.” In this instance, he’s talking about Neville Longbottom’s attempt to stop Harry from chasing after the sorcerer’s stone, which he knew would be both risky and reckless. While being constantly argumentative can push friends away, it’s important to be able to speak up and voice your true opinions when it counts. You shouldn’t have to pretend to be comfortable with every decision your friends make if you have concerns about it. True friends will trust you, and will understand that you have their best interests at heart.

It’s safe to say that Harry’s story would never have been the same without the powerful friendships he built throughout the series. But these friendships didn’t happen by accident. From the very beginning of the story, we see Harry and his friends making decisions that allow them to have happy and healthy social lives. The good news is, you don’t have to know any magic spells in order to follow their examples. By choosing friends who you connect with, who you can be yourself with, and who respect and value your opinions, you can have friendships just as strong as Harry’s without ever setting foot outside the muggle world!