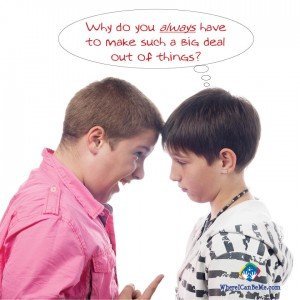 Standing up for yourself is important. Being able to express the opinions that really matter to you is important too. A true friend will allow you to do both of those things. They will understand that you don’t always have to agree on everything in order to get along. They may even like that you both see things differently, because it gives you stuff to talk about. Still, you’ve got to keep in mind that there’s an important difference between expressing yourself and being argumentative. Not understanding that difference can push others away, and hurt your chances of becoming their friend.

No one wants to feel like they have to watch what they say, because they might get pulled into an argument. If your friends feel like they always have be on the defensive when they’re with you, it might make them uncomfortable, and they may avoid conversations with you altogether.

So next time, before you argue, try asking yourself these 3 questions:

When it comes to disagreeing, always remember that hurting someone’s feelings should never be your goal. You don’t want to make others feel bad about their opinions, even if you don’t share them. You don’t always have to make others come around to your point of view either. Sometimes, it’s best if you just agree to disagree. It will make building friendships go much more smoothly, and it’ll help you cut back on unnecessary drama. Just as important, it’ll give you a chance to consider ideas and opinions you may not have thought about before.