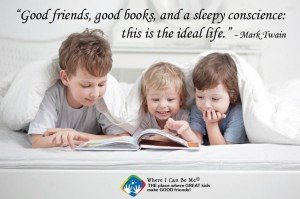 The Where I Can Be Me® team is particularly excited about the fact that today is International Children’s Book Day! Children’s books are a great way to introduce kids to the joys of reading and language, but they can also instill some great lessons about social skills. Check out the list we’ve put together of our favorite children’s books and the social skills lessons they promote. For the most part, these books are classics that have remained popular for years, so it shouldn’t be too hard to track them down and get reading!

We realize that there are plenty of great children’s books that aren’t included on this list. It’s our hope that the stories we’ve mentioned will serve as a starting point for you and your child as you search for entertaining ways to reinforce important social lessons. It is important to remember that you will need to explain the story, themes and events to your child. This will help your child understand what is happening and how it relates to his or her life.