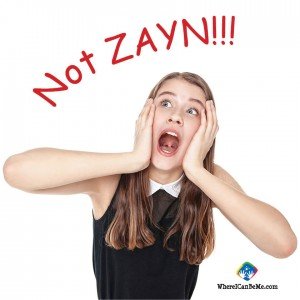 For the last couple of days, kids, tweens and teens have been in a state of hysteria. There have been tears, tantrums, messages of despair posted to Twitter, and moments of pure distress captured by Vine. With a reaction so huge, it’s sort of surprising that the source of all this chaos is something most adults wouldn’t give a second thought. As you’ve probably heard by now, the massively popular boyband, One Direction, is losing a member. Zayn Malik announced on Wednesday that he’s moving on from the band to enjoy some time out of the spotlight. By all accounts Zayn is alive and healthy.

So what’s with all the melt-down’s?

There’s no shortage of theories about this floating around the internet. Some say it’s the feeling of loss. Others say it’s the realization that nothing is permanent. Or, that it’s the sense of unity that comes from mourning the same thing everyone else is mourning. While any of one of these theories may be true, there’s another phenomenon at work here. And it’s an important one to take note of, because for some kids, it will continue to cause problems long after the side-effects of Post-Traumatic-Zayn-Syndrome have subsided.

What I’m talking about is the blurred line between friendship and fandom. This is something we’ve discussed before in the context of friendships. When we use the term “fan” in this context, we’re not just talking about the relationship between celebrities and the kids that fill the arenas at their concerts. We’re talking about any situation where a child becomes emotionally invested in a person who doesn’t reciprocate.

In these situations, children find themselves getting their feelings hurt again and again because they’ve put so much effort and emotion into the relationship, only to be let down. That’s why it’s so important for a child to be able to tell the difference between someone they’d like to be friends with, and someone they are friends with.

A true friend is someone that is there for you when needed; someone that includes you in their plans, shares their thoughts and feelings with you, and seems to genuinely value your friendship. When your child is seen as a “fan” rather than a friend, this is not going to be the case. No matter how much your child likes this person, she will probably find herself ignored or excluded. In worse scenarios, the other kids may say mean things behind her back, make fun of her, or take advantage of her desire to be accepted by them.

It can be an especially big problem during the middle and high school years, when “crushes” come into play. We were all there once. We can all remember what it was like to whisper with our friends over the cute guy or girl in our class we were too nervous to actually talk to. Looking back, it probably seems funny. That’s because it was just a phase, and we walked away from it generally unscathed.

When a child struggles socially, though, there’s a bigger risk involved. These children often have a difficult time reading tone, and body language. It’s hard for them to judge when they’re being mocked, or teased. They can’t tell when someone is only pretending to be nice in order to manipulate them. That makes it easy for a simple crush to escalate into a case of bullying, and can have a lasting impact on your child’s social life.

Now when it comes to Zayn Malik’s new direction, your child’s disappointment isn’t necessarily something to worry over. As with all pop-culture crazes, the hysteria will pass and the desperate tweets will end. Now is probably not the time to sit your child down for a lecture about friendship vs fandom. Saying that Zayn doesn’t reciprocate your child’s emotional investment isn’t going to help the situation and it isn’t going to earn you any points with your child.

Now is, however, a good time for you to take note of your child’s reaction. Ask yourself if her response to the news seems appropriate. Think about whether or not this is a one-time thing, or part of a pattern. Does your child seem to have a clear understanding of the line between friendship and fandom? Does she know how to judge which relationships warrant an emotional investment, and which do not?

If it seems like your child gets attached a little too easily, it may be something you want to discuss with her. It could help to talk about what a positive relationship looks like, and why those friendships are important. You may want to consider getting some help from a trained social skills therapist, who can help your child recognize and foster positive friendships. And if this helps your child learn to lead a happier and healthier social life, then despite what they’re saying on Twitter, there might actually be a bright side to Zayn Malik leaving One Direction (just don’t let your child hear you say that!).