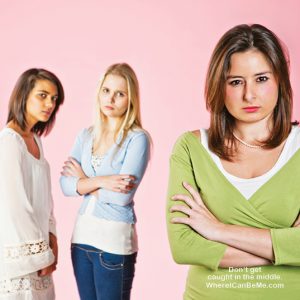 It’s bad enough when your friends aren’t getting along. Being stuck in the middle can make the whole situation twice as awkward and stressful. You want to make sure both of your friends know you care about them, and their feelings. But you also want to avoid being pulled into the drama yourself. The way you handle the situation is important. If you’re not careful, you could end up causing serious damage to one or both of your friendships. So, what can you do to get through this fight unscathed? It’s a tricky task, but these tips should help:

Navigating a feud between friends can definitely be a challenge. Everybody is different. And fights can arise for dozens of different reasons. Unfortunately, that means there’s no guaranteed way to stay safe from the drama. You can better your chances of protecting your friendships by being considerate, honest, and supportive of both friends while avoiding getting sucked into the fight. And if things seem to be spiraling out of control, it’s always best to talk to a trusted adult. Things will likely be awkward for a little while, but hang in there! With a little time, empathy, and effort, the drama should blow over soon, and everything can get back to normal.